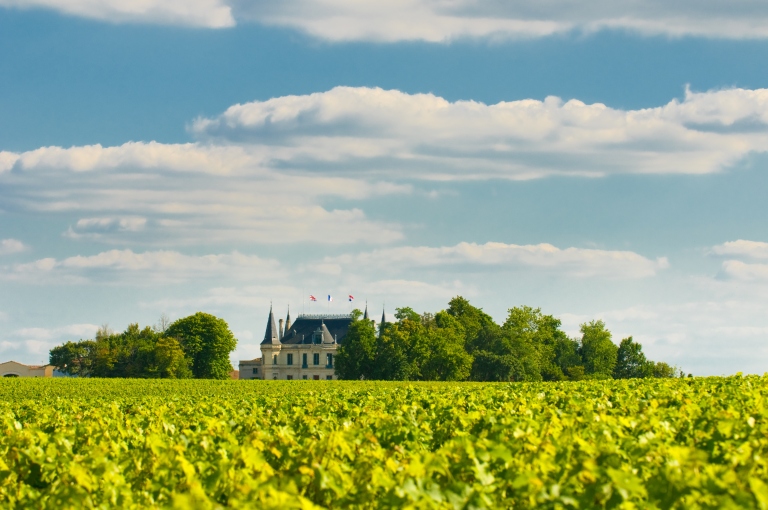 The weather was 25-30C° and not a cloud in sight for most of my trip. Lafite, Latour, Mouton and Margaux opened their chais to me.  Europcar upgraded my rental to a convertible. Apart from a tiny hotel booking incident, the gods were smiling at me. This trip looked likely to be… well, monumental!

I was given the chance to re-taste some of the 2010 I had seen during the Union des Grands Crus en primeur in April – and the extra month in the barrel allowed them to settle down. The 2010 vintage is so ‘big’ that it will be around for our children to savour, they are laden with structure and tannins, good levels of acidity and fruit. I haven’t scored these as I prefer to taste them again in bottle in a years time, anything could happen till next year.

Amongst the first growths, I thought the Margaux to be the wine of the vintage, and the honour was even greater as Pascal Bascaules, recently headhunted by Francis Ford Coppola to work at Inglenook, officiated the tasting. Here is one happy man: a perfect vintage and a dream job to look forward too.  The wine itself was gorgeous: a shiny  deep, red/purple colour with a  violet and red berries nose and an amazing palate which was balanced and fresh. The tannins were round. The second wave came out as red cherries and liquorice – ready to drink now and will be a joy to drink in the future.  The yin to Margaux’s yang is most certainly Mouton Rothschild, an elegant more masculine version of blueberry and brambles. Just clean and simple, checking my notes, I had written ‘I just want to drink this’. An Alice in Wonderland style wine, maybe? Lafite was very masculine and far more mineral with black cherry liquorice and velvety cassis, very good but outclassed by the former wines. Latour was closed in my opinion

Amongst the super seconds, I thought Montrose and Cos d’Estournel in St Estephe were stupendous and had some good influence from the Petit Verdot grape. Cos included it for the first time since 2005 and you could taste the five spices mixed with red currants and strawberries. It also had the classic Cos d’estournel fine chalky curtain of tannins kicking in at the end. Montrose had a pungent deep dark cherry nose mixed with cinnamon, the spices derived again from a high amount of Petit Verdot and Cabernet Franc. I had some chocolate and coffee on the palate too. Pontet Canet had a deep cassis and  (Szechuan?) pepper nose with far more tannins up front. Its palate had liquorice stick and clove hidden fruit – very good too. For the more classic claret drinkers, Léoville Las Cases is back amongst the titans, a huge bramble fest with fruity tannins dancing in a inky coloured wine.

Amongst the second wines, I would like to mention Forts de Latour and Dame de Montrose especially. Les Forts was a mixture of bramble and pepper nose and a cassis and cream palate whereas la Dame was very feminine with a blueberry nose.

Other notable mentions are Duhart Milon and Clerc Milon, these two Pauillac cousins were attracted my attention for their elegance whereas on the right bank Hosanna was a beautifully structured velvet and pepper, cinnamon driven bowl of cassis, blueberries and black cherries – those merlots are just fine in 2010! I also liked Stephan von Neipperg’s la Mondotte and Canon la Gaffelière.

The fringe benefits of touring the chateaux is that they pour some of their more accessible wines as well and I also try to keep to the same vintage. This time I focused on 2004 and I had a Rauzan Gassies for dinner with bavette and fries which was all black currant and spices (90 points), its tannins had melted away. During my tasting at Malartic Lagraviere, its 2004 was also all black currants but with a bay leaf presence and should be ready to drink in a year or two (89 points). Lunch at Cos d’Estournel we had a very masculine but fresh 2004 Cos d’Estournel which was drinking perfectly well with more black fruit and spices but with far better structure (91 pts) with our tortilla like omelette. All three are pretty well priced at the moment so I would pick these up when you come across them, they may be a bargain!

Upon my return from Bordeaux, the En Primeur started in earnest with Beychevelle trading up 20% from its €45 launch price and Lafont Rochet, Chasse Spleen and Potensac all came out too. The season will be slow as Vinexpo is at the end of June and the big Chateaux would like to come out with a bang. If you would like to get my opinion on any En Primeur release, you may fine me on Twitter.